The Death of Film: Part III. Future or Fin?

When exploring the topic of movie universes and sequels, it is necessary to consult the professionals. In Part I of the “Death of Film” series, creators and hosts of the LaF Podcast Richard Lusk and Ryan Bull discuss the future of the Film Academy and cinema itself.

If I asked you to name any movie that won Best Picture at the Oscars in the past five years, could you do it?

Maybe you remember the hubbub about Moonlight when it was awarded Best Picture in the envelope snafu of 2016. Perhaps you knew about Green Book from all the Twitter outrage after it snagged the award this year. But, let’s be honest, no one remembers Birdman or The Unexpected Virtue of Ignorance– no one saw it. 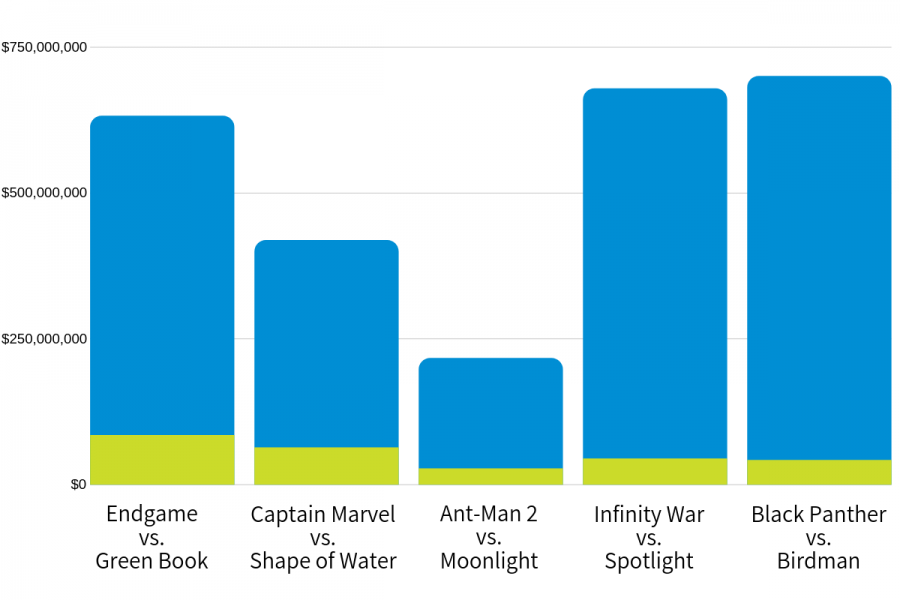 These stats compare the past five Best Picture winners to the past five installations in the Marvel Cinematic Universe (MCU); it is worth noting that Marvel put out all of these films in 62 weeks, and these stats were taken just 11 days after Endgame’s release. Take a look at the domestic box office numbers- the total earned by the past five Oscar winners is just 10% of Marvel’s domestic earnings in a year, even when Endgame has only been in theaters 11 days at time of story publication. Anyone could guess that Marvel makes some serious bank – over 5 million domestically per day over the last five films- but the numbers show a staggering difference in comparison to the Oscar bait. And sure, Marvel might not be the best comparison with Oscar winners due to their reliable blockbuster success, but even run-of-the-mill movies released this year, like Mamma Mia 2 and Ocean’s 8, consistently outperformed Best Picture winners by at least 100 mil or more.

Shortly before the 2019 awards season really kicked off, the Academy of Motion Picture Arts and Sciences announced the addition of a “Popular Film” category, which would target such popular blockbusters that year as Black Panther and Crazy Rich Asians. Predictably, people rioted on the internet; fans of the movies complained that this category would cheapen the stories and downplay their significance, while film critics regarded a new category as pandering to subpar stories for the sake of getting people to watch the Oscars. In the end, the Popular Film category was postponed until at least 2020, and Black Panther scored a Best Picture nomination in one of the most eclectic groups of contenders in years.

“I still don’t think a lot of these blockbuster franchises will win those awards,” Bull commented – and it would seem he is right. Everyone knows how the Oscars ended, but let’s take a look at the 2019 Golden Globes- the “Oscars Lite,” if you will. The two best picture awards of the night were won by movies seeped in controversy- Green Book for Best Comedy, and Bohemian Rhapsody for Best Drama. Both movies faced scandals throughout filming and release, and the general critical consensus issued a resounding “meh.” Black Panther, on the other hand, was widely praised by film critics and secured three nominations that night- they walked away without a single award.

“I think the Academy breaks apart,” Lusk commented grimly. “Hollywood likes to reward themselves and pat themselves on the back, but they can’t even find someone to host the Oscars.”

When an institution like the Academy fails to grab public attention- for the right reasons or not- it will die. For the past few years, the awards ceremony has persisted on a diet of scandal and media discourse. Not many in the audience watch to see how many trophies films like Vice can take home. They watch to see if a host-less Oscars ends in disaster, if the #OscarsSoWhite campaign has any effect on the winners, if the Times Up movement changes the red carpet. The popular film category is just an extension of the drama-for-views mechanism.

“Really, the new category of popularity is just them trying to remain relevant,” Lusk sighed.

“Yeah, no one really knows the last time a popular film won Best picture,” added Bull, “Probably the Lord of the Rings: Return of the King, years ago.”

“And now it’s all arthouse theatre. You watch the Independent Spirit Film Awards- it almost has the exact same nominees as the Oscars,” noted Lusk. “I think there’ll be a group of people that like and listen to the Oscars, but it’s not the same people that go and watch Marvel films or Star Wars movies- they don’t swim in the same pool.”

So let’s say the Oscars die out, no more Academy. Without some incentive for artsy films and critical competition, what sort of movies will be made? The answer may have already shown itself in the odd 2019 crop of nominees- Black Panther, Bohemian Rhapsody, A Star is Born.

Obviously, superhero movies like Black Panther will still exist- the nth iteration of Captain America will be playing in theaters when the world ends, guaranteed. Between DC and Marvel, massive, expensive superhero movies remain a constant, unwavering force in the box office. Bohemian Rhapsody brings in a new generation of music-focused blockbuster movies, including the upcoming Rocket Man and Yesterday. Catchy tunes, nostalgia, and current stars like Rami Malek and Taron Egerton will bring moviegoers of all ages to the seats – no matter how much film critics complain about the writing and editing. A Star is Born, however, unleashes the power of the fastest growing tactic in entertainment- the remake.

“You don’t want original properties,” he explained, “You want to know that you have bankable fans, and if you’ve got a film that’s 25 years old, you know the ten year olds are now parents and have ten year olds of their own, and that’s why we have a remake of Lion King coming out and Aladdin and Dumbo- because they know those are bankable things, people are going to want to go and take their kids to it.”

“They’re also at the point now where you’re going to have to start recasting iconic roles,” Lusk jumped in, wondering how other franchises could fare with the Bond treatment.

“And Mary Poppins isn’t a remake per se, but it’s close enough; it’s a spiritual remake,” continued Bull, “They’re banking on parents remembering the movies they love from their childhood and wanting to share those experiences with future generations.”

Just look at Disney- since Tim Burton’s take on Alice in Wonderland in 2010, the studio has released nine live-action remakes of classic films, with new versions of Lion King, Maleficent 2, and Lady and the Tramp due out by the end of the year. Will these be any good? Well, they don’t have to be- regardless of what Rotten Tomatoes says, people will want to hear Beyonce in Lion King or see what Angelina Jolie does next as Maleficent. Disney has mastered the element of star power, and these remakes aren’t going away any time soon.

This is the way film goes: the universes and franchises continue to expand and conglomerate, forming an amoeboid box office beast that changes the very idea of motion picture.

“I bet you,” Lusk wagered, “within the next ten years, Netflix won’t exist the way it was.”

Netflix, the prime bulwark of binge-watching, threatened? It might not be as unlikely as it sounds. The monopolistic streaming service hasn’t necessarily been performing on the stock market recently, and now they’re engaged in legal battles to keep their content rights (namely those for The Office, the most-watched show on Netflix). Going forward, Netflix will face major competition from new streaming services- not just Amazon and Hulu, but also the upcoming Disney +, Apple TV, and Youtube TV.

“It’s just entertainment; we get entertainment. Like you see kids huddled around the phone- that’s the way they entertain themselves,” offered Lusk.

The old names are fading away- gone are the days of MGM and Warner Brothers, enter the age of independent content.

“[You’ve got more potential for originality on the] smaller screen because of streaming, things of that nature. Also because it’s so inexpensive to make movies and entertainment- you can film with an iPhone almost at the same quality that you can with existing cameras,” said Lusk. “If you have an idea and it’s a good idea, you can put it on film and put it out there- you don’t even need a go-between or a studio, you don’t need producers, you don’t need to get any other outside money. I mean, you could almost do it all yourself.”

Popular content today thrives on Youtube and on smartphones, reiterated Bull. Crowdsourcing and Kickstarter have allowed fans to control the production of entertainment they want to see, whether that’s re-booting classic sitcoms like Roseanne, or spurring studios to make sequels in long-dead series. As film goes forward, the traditional boundaries of studios and production companies will only continue to vanish, and moviegoers will adjust to a multi-level storytelling experience.

So Spielberg will lash out at Netflix films snatching award nominations, Oscar-bait movies will continue to flop, and uptight film critics- the writer of this piece included- will bemoan what Marvel is doing to cinema. But, none of this can resurrect what is lost. Casablanca has become Captain America, Lawrence of Arabia has become the live-action Lion King, and film, as it was traditionally known, is dead. Is this a horrible thing? After all, the film audience today is not the same audience it was in the 1950s, and new technology has brought even the most impossible ideas to the big screen. Now the movie world goes boldly into a new stage, growing ever-expanding universes and instant streaming content and leaving traditional cinema in its grave.

Committed to graduate in 2020, Laura Madler is Editor-in-Chief and fourth year staff writer for the Lion's Roar. Outside of class, she can be found twirling...