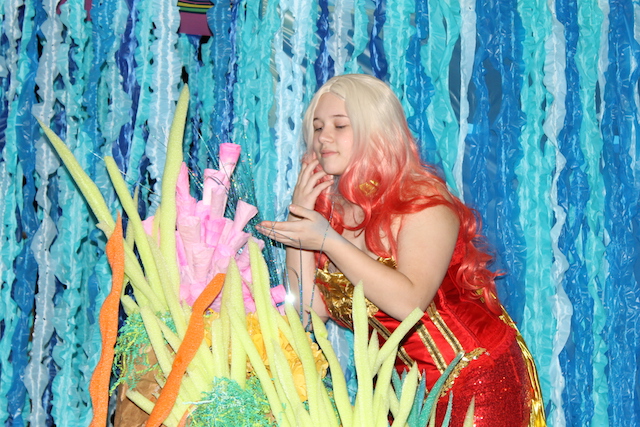 Sarah Clark sports her sequin-studded mermaid costume as she admires some coral.

Since January, the Menchville Players have been hard at work rehearsing and preparing for their 2019 spring musical: The Little Mermaid. However, there’s much more to making a musical than just memorizing lines and music cues. Under the direction of beloved drama teacher Courtney Rice, and with the help of the theatre classes and dedicated stage crew, the drama department has created magnificent set pieces and costumes for this year’s show.

Building the sets and costumes for a show this spectacular is a long and intense process, but the Menchville Players are up for the challenge. Many of the students have sacrificed their Saturdays to come in and work.

After hours of hard work during tech week, the Menchville players break for dinner. These light, intimate moments amidst a stressful day are great for cast bonding.

The cast and crew of The Little Mermaid are more than excited for their upcoming show. If you’d like to witness this dazzling performance for yourself, the dates are (Thursday – Saturday) April 18th, 19th, and 20th, as well as (Thursday – Saturday) the 25th, 26th, and the 27th. The show starts at 7:00 pm, and tickets are $10 at the door.