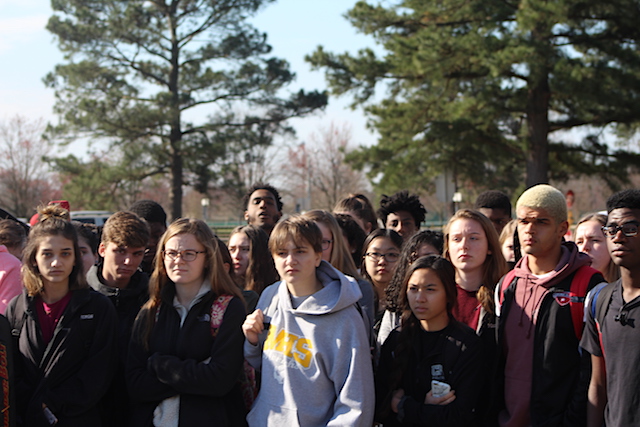 Menchville students crowd in a circle, listening to Ramirez’s speech with contemplation.

“As you know, last month there was a shooting in Parkland.”

The students of Menchville High School walked out of class Wednesday morning, March 14th, at 10:00 AM. They weren’t going to another class or to lunch, to see teachers or friends, or traverse the halls- they had a purpose on a much larger scale. These students exited en masse from their rooms and congregated in the Menchville parking lot to demonstrate against the gun violence that seems to be getting worse and worse in American schools. With tearful eyes and strained voices the students stood for seventeen minutes in the cold, speaking out and showing up for a cause they passionately believe in.

The demonstration was orchestrated by senior Sophia Ramirez as a part of the walkouts happening in schools across the nation, a protest organized by the founders of the Women’s March to bring attention to student voices against gun violence following the Parkland shooting. As students left the building, the mass formed a semicircle under the school awning. Ramirez stood on the blacktop of the parking lot in the center of the crowd, shouting above the din of student voices and scuffling.

With the noise of the crowd diminished, the students attended to the real issue at hand- the protest. The demonstration began with an introduction by Ramirez on the point of the walkout.

A grim message, but one that students knew was the truth in today’s world of prevalent gun violence. With minds centered on the seriousness of this issue, Ramirez introduced an activity to show her peers how serious the effect of gun violence could be on Menchville’s own school community. The idea, created by Jeremiah Gaulding, was to pull seventeen names at random from those gathered at the protest, mirroring the seventeen deaths in the shooting at Marjory Stoneman Douglas High School.

Seventeen names were drawn at random from a pot in Sophia Ramirez’s hands. Seventeen names came forward from the gathered crowd of young, contemplative faces. Seventeen names of Menchville’s own students who could have been lost at the hands of gun violence like those students in Parkland just one month ago.

“You guys probably know at least one of these people. Either you know them, or you’ve seen them around school. The point that I want to get across to you right now is that these are seventeen people, whether you see them on the daily or you’ve never seen them, any of these seventeen people could have lost their lives if we had been affected like the Parkland students have, and this could happen to us. Gun violence is real.”

Ramirez and Gaulding’s activity shed light on how impactful shootings can be on a student body- a possibility that students rarely, and should not have to, consider. Said Ramirez on the demonstration, “I think we made it feel real for a lot of people.”

Concluding the protest on a more hopeful note, Ramirez urged her fellow students to act and wield their future political influence with care, and to fix these issues that are putting students in danger. Voting, especially registering to vote as soon as possible, was stressed as the best means to make student voices heard in government. The crowd at the protest listened intently as Ramirez talked about voter registration in Virginia and ways for young teenagers to create political change. School Board Member Shelly Simonds, who had been attending the protests in Newport News High Schools during the morning, looked on with pride. Simonds is an outspoken supporter of student involvement in the world outside of school, saying after the protest, “I think education is not just about test scores and passing rates- it’s about getting students ready for citizenship. That’s why this discussion about voting and student rights to protest is so important, and allowing students to exercise their rights is preparing them to be citizens.”

The Walkout Against Gun Violence marks the largest and most organized protest in Menchville’s recent history. Student-organized and student-led, this demonstration allowed the Menchville community to voice their concerns on a national issue. Principal Bobby Surry lauded the student organizers for their knowledge of and passion for the point of the protest, “I think the neat piece, too, was that they had an understanding of what it [the protest] was about and why we needed to do this. Change starts from a grassroots level where you start small and work your way up, so starting in the school was one of the pieces that can make a difference, because students as voters, and our younger folks who will be future voters, if there’s something they can become passionate about then they’ll want to make a change,” Surry continued, “I think that when we look in our community and we see the number of people who are being killed as a result of gun violence- I think that there’s certainly a strong push for people to live in a more peaceful, loving society. I think that when you reach a certain age, when you can begin to think in a more mature fashion, you understand that this is an opportunity for people to stand up for something that is the best for our country.”

In a post-Parkland world, the threat of gun violence is not going away, nor the student action against it. “It used to be that you could go to the theater and not worry about what happens, you could go to your church and not have to worry about a gunman, you could go to a mall and not have to worry about those things, and you could certainly go to schools,” said the Menchville principal, “None of us want anything like that to happen to you guys [Menchville students]. To me, you’re part of my family, and as a sort of fatherly figure, or I guess I’d better say grandfatherly figure, I don’t want anything to happen to y’all because this school is like a part of me, and it would be just devastating to me for something like that to happen at our school.”

The silence of student voice has been broken now, and the youths of Menchville and the United States as a whole have no intention of keeping quiet on the issue of gun violence anymore. Students have a voice, and that voice matters.

“I’d like you to have a moment of silence, not only for these people, but for the people who really did lose their lives where this was not a demonstration- this was reality.”

Committed to graduate in 2020, Laura Madler is Editor-in-Chief and fourth year staff writer for the Lion's Roar. Outside of class, she can be found twirling... 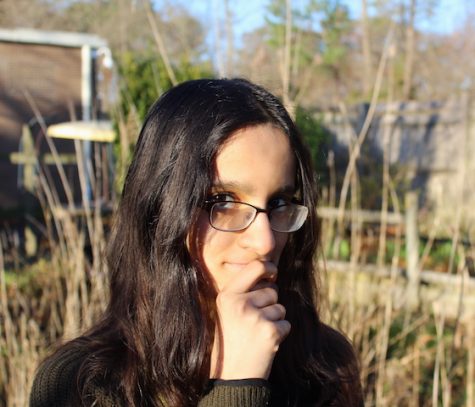 Committed to graduate in 2018, Supreet Singh likes to pace for hours on end imagining things to avoid her responsibilities (scenarios to go with songs...