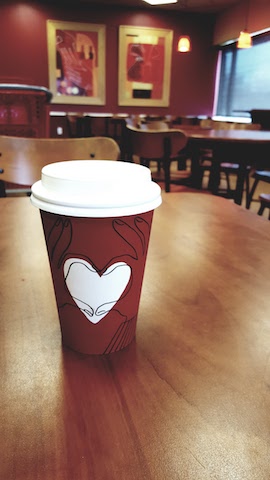 It’s that time of year again! Every year since 1997, Starbucks has produced dazzling new holiday cups along with a line of seasonal themed drinks. There’s Caramel Brulée, Eggnog Latte, Chestnut Praline Latte, Gingerbread Latte, Holiday Spiced Flat Latte, and many more. Starbucks consumers look forward to the unveiling of the yearly Starbucks cup – which has caused quite a number of controversies over the past few years. Starbucks is often accused of holding a political agenda and using their cup designs to distribute subliminal messaging about their beliefs on religion and controversial issues. Starbucks has assured consumers that they have no agenda or idea they wish to display with their cups. The holiday cups are simply meant to be fun, festive and inclusive for every customer who walks through their doors.

It wasn’t until 1999 that Starbucks began making their annual holiday cups red, and the cup controversies didn’t begin until 2013 when Christmas-themed illustrations were removed from the cup’s designs. Consumers were furious, and many people claimed that Starbucks was anti-Christmas. The controversy and backlash continued heavily from then on and has become a part of the Starbucks Holiday tradition. Back in 2015, a Starbucks spokesperson named Jeffrey Fields defended the plain red design and said that Starbucks was simply trying to “usher in the holidays with a purity of design that welcomes all of our stories.”

Unfortunately, not everybody brought into the ‘purity’ statement. Starbucks was also accused of satanism as a result of their red cups.

This year’s cup controversy resulted from the two hands on the top left of the cup. Many people perceived them as a same-sex couple and slandered Starbucks for having a gay agenda. To please customers, Starbucks issued a variant holiday cup with plain hands holding up a heart.

All in all, it’s impossible to please everyone, but Starbucks has been trying their best. The wild Starbucks cup controversies have simply become a holiday tradition.