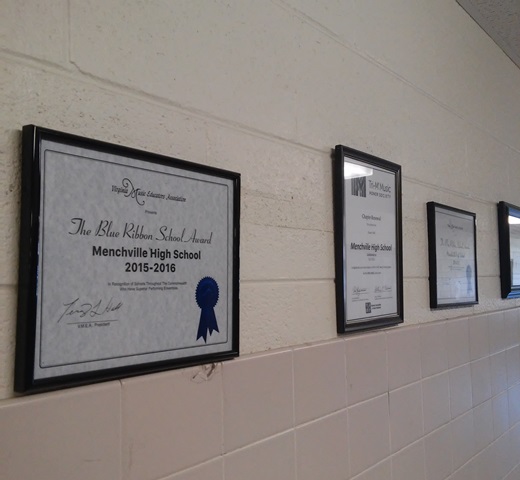 Menchville's music awards are on display in what is locally known as "the band hallway." The 2017 Blue Ribbon School award will soon join the prestigious grouping.

The Menchville High School Music Department has once again been awarded the prestigious Blue Ribbon Music School award for their efforts at State Assessments last week. This year marks the third consecutive year of Menchville’s Blue Ribbon status, with the school being awarded Blue Ribbon honors for the first time in 2015.

This year Menchville sent seven different groups to State Assessment. The groups included: Concert Band, Symphonic band, Subito Concert Choir, Women’s Ensemble, M-Pulse, Chamber Orchestra, and a full orchestra group that consisted of students from both Menchville and Denbigh. Both band groups were under the direction of Deborah Sarvay, choral groups were led by Jennifer Jarrett, and orchestra groups by Anna Moyer.

In order for a school to be designated as a Blue Ribbon Music School, all departments entered in State Assessments must achieve “Superior” rankings. State Assessments are judged on a 1-5 scale, with Superior being the highest rank possible. Receiving this Superior rating denotes above-average musicianship and direction.

Groups entered in State Assessments must perform in two main categories- prepared pieces and sight-reading. The prepared pieces are chosen in advance and practiced constantly in the weeks leading up to the Assessment. These band, choral, and orchestral arrangements are ranked on a number scale from 1-6 according to difficulty, and Menchville’s selections this year ranked in the 4 to 6 range. In addition to a prepared performance, groups must play or sing a piece they have never seen before in the sight-reading section. The director and students only have seven minutes to study the piece, without practicing sections of the piece or even touching the instruments, before performing it for the judge. All of Menchville’s entrants earned top grades in these categories.

Across the state of Virginia, only 75 high schools and middle schools were awarded this prestigious honor. Menchvile is the only Blue Ribbon Music High School in Newport News, and has been for the past three years. Now that State Assessments are through, band, chorus, and orchestra will all be working on preparing their pieces for spring concerts in the coming months.