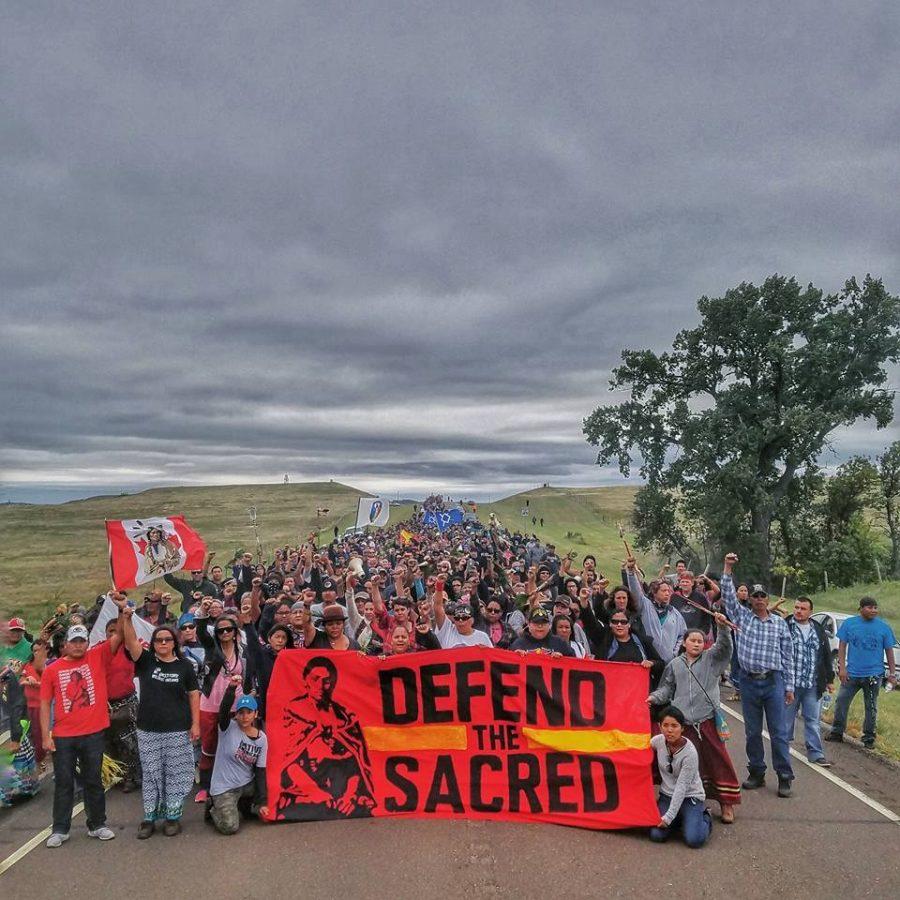 Photo valid under the Creative Commons license with attribution to Nick Bernabe and theAntiMedia.org.

A year into the protests, the likelihood that you have not heard something about the conflict between the Standing Rock Sioux tribe and the energy company Energy Transfer Partners (ETP) is extremely low. The ongoing power struggle has sparked the #NoDAPL hashtag on various social media platforms, resulted in celebrity outcries and arrests, and maybe even concern as people suddenly wonder whether their Facebook friends have booked tickets to North Dakota.

The fight is complicated, and has rapidly been transfigured into a two sided battle involving the Standing Rock Sioux (the tribe currently living on a reservation in North and South Dakota) and Houston-based Energy Transfer Partners (ETP)  who have  proposed an underground pipeline that skirts the perimeter of the reservation. The issue has gained momentum over the past few months as it surrenders itself to the general distrust people have begun to harbor against oil pipelines after various spills throughout the years and stirs the constantly reoccurring tensions between Native tribes and the U.S. government.

In June 2014, natural gas and propane company  ETP released to the public it had the resources needed to move forward with a new project: the Dakota Access Pipeline.  The underground pipe would stem from a geological formation called the Bakken Formation in North Dakota and stretch to Pakota, Illinois. The 1,134-mile pipeline would have the capacity to carry roughly 500,000 barrels of crude oil.

Since the announcement, two conflicts have arisen. The first is concern over water contamination. Oil contamination of water is not only a nightmare, but a danger to public health, and is the primary reason many protestors have joined the cause . However, ETP has promised to keep 24/7 tabs on the proposed underground pipeline; the U.S. Army Corps of Engineers even deeming it safe in an environmental assessment of the plan.

The second conflict is over land infringement. The Sacred Stone Camp, also known as Iŋyaŋ Wakháŋagapi Othí, formed in April as a hub of Native American resistance to the pipeline. Sioux protesting is based off of the water safety issue and the fact that the pipeline runs within half a mile of their reservation. An early print of the plan considered running it through North Dakota’s capital, Bismark, as an alternative, however it was rejected as a potential threat to Bismarck’s water supply. This pre-draft that most are calling hypocritical, along with the argument that the pipeline would infringe on Native American sacred burial grounds and land, are the main reasons for civilian opposition.

The fiery situation ultimately delves into the historically oppressed and complex legal world of Native-American sovereignty. Native protesters suggest that treaties, such as the Treaty of 1851, protect their legal right to occupy private land in political resistance of the construction.

National guard actions—including hundreds of arrests, the use of pepper spray, and the use of water cannons in below freezing temperatures—have aided the protests in going viral, national tensions against police igniting outrage online.

“It’s all worth it to protect Native American heritage, and I don’t think that the building of the pipeline has more pros than cons,” senior Noah Nipp commented.

However, on Sunday, December 4th, the Corps publicly announced the easement needed to continue construction across Lake Oahe was rejected. The halt will stand in effect while the Corps investigates alternative routes for the pipeline and prepares a full environmental impact study.

Despite rejoicing in victory, protestors have no plans to leave the land. Many have decided to stick out the winter, fearing that the agreement is not as relatively sound as it is presented. As many as 2,000 veterans have descended upon the site to join the protests, and provide support for the tribes.

Perseverance aside, winters in North Dakota are renowned for their harshness; average temperatures toppling out around 13F with lows of 2F and below.  This has many people concerned about the well-being of the protestors that will be exposed to the elements, fears of hypothermia becoming a reality.

“I don’t think I support protesting over the winter. First off, it is a serious health risk on the protestors part, I believe there could be alternatives out there that are much safer. Two, in my opinion, the focus has become misplaced. When Shaliene Woodley got arrested for protesting, it became more of a revolt against authority than it was to send a message to preserve Indian reservations,” said senior Gillian Neisel.

“I support the argument, but not what it’s becoming,” she added.

Yet the possibility of freezing to death has done little to stop protestors and followers at home initiative to help.

“I would absolutely brace the harsh temperatures in order to go and protest with the people of Standing Rock. Water is essential to living, and we’ve abused the presence of indigenous peoples for years,” sophomore Cheyenne Conaway said about the issue.

President Elect Trump has announced that his cabinet will tackle the issue when they take office in January.