"Leadership is about serving others, not yourself" 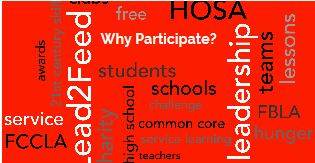 Lead2Feed.org
On October 21st, Menchvilles’ class of 2019 met for a second time to continue their introduction to the Menchville  Lead2Feed program.

Focusing on personal growth and the building of leadership; students were asked to imagine a personal goal, and then reflect about what perceptions or habits they would need to reinforce in order to be successful in achieving that goal.

Activity Director Pete Mercier, and English Teacher Allison Nuckols, discussed with students how a strong leader “serves others, not themselves.” Quotes from sources such as Mahatama Ghandi and David Brooks were  used to motivate students.

Students were also introduced to the “Bystander Effect,” a “psychological phenomenon that affects people’s behavior.” When faced with a problem, the “Bystander Effect” causes people to think, “since there are so many people in the world fighting hunger, they must not need me.”

Students were then shown shocking statistics about global hunger such as; “Some 795 million people in the world do not have enough food to lead a healthy active life. That’s about one in nine people on earth.”

At the end of the  meeting, students  brainstormed possible ideas and partnerships that may help the local community.

“The assembly was a pleasant experience, and was very eye opening about world hunger and poverty,” Freshman Chris Kessel responded when asked about the meeting.