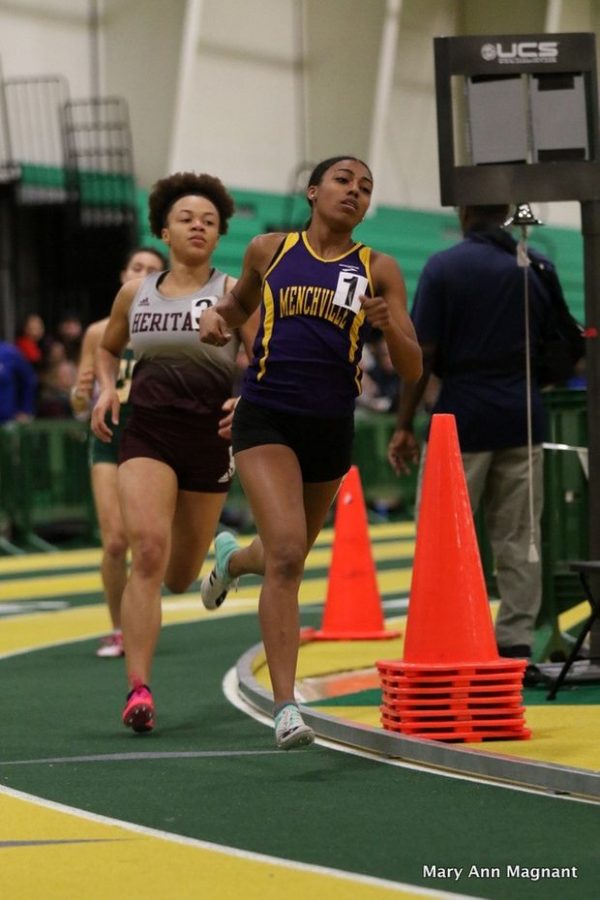 Senior Menchville runner Ari Riddick has truly left a mark on the Menchville track program in her five years running on the team. And, just like many other years, Riddick has qualified for States in many different events, including the 4 by 400 relay. With one of her last big meets coming up, we took some time to get to know Menchville’s star runner.

Riddick started running because she was “really athletic as a child,” and her mom suggested she would like it. Although running can be thought of as torture for most, Riddick enjoys both the physical aspect and social aspect, saying, “I really like running, but I also made a lot of friends on the team.” Riddick likes running so much, in fact, that she plans to get a running scholarship for college, where she’d like to pursue a degree in forensic science.

As a runner who must be prepared for many big meets, including numerous invitationals and state qualifying meets, Riddick knows how to get ready to run. She says the best way is to put in her earbuds and listen to really loud rap music so she can, “block out all the other sounds.”

We know about Riddick’s running, but she has a lot of interests outside of the sport, as well. To find out more about what she likes to do outside of running, we grilled her with some rapid- fire questions.

If you played another sport at Menchville, what would it be?

Besides running, what do you like to do in your free time?

I like to paint, and read, and sleep, and eat.

What is a hidden talent you have?

I can’t sing, dance, rap or play piano, but I can play “Hot Cross Buns” on the recorder! And I can roll my stomach.

What is one place you wish you could visit?

Italy, because I want to try the food, and it seems really beautiful.

What reality show do you think you’d be good on?

I don’t really watch reality shows, but probably…I’d like to be on Survivor.

Make sure to come support Ari and all of her fellow Monarch runners as they head to regionals at Boo Williams Sports Complex this Saturday!