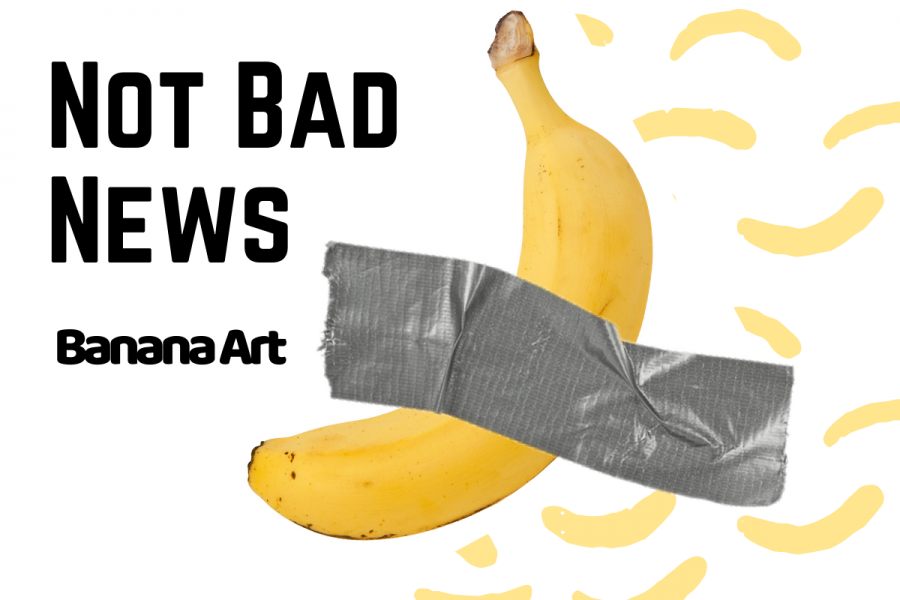 On this edition of Not Bad News, the Lion’s Roar staff brings you the best of the art world.

The art world is in hysterics.

This past week, all focus has been on Art Basel Miami Beach, an art event in Florida. The gallery is no stranger to unusual works, but Maurizio Cattelan’s piece may have taken the stereotype of modern art to a new extreme. Cattelan’s piece, entitled “Comedian,” was, simply put, a real banana held to the wall with a strip of silver duct tape. It sold for $120,000 to Billy and Beatrice Cox, who plan on donating the piece to a museum one day, which will be maintained by replacing the banana every few days when it gets “ripe.”

If you have questions already, you are not alone. But this is not where our story ends, dear readers.

Following the purchase of the 120k banana (even a banana from Whole Foods isn’t priced that high), the art piece was destroyed, not by the original creator a la Banksy’s shredding print, but by performance artist David Datuna. Yes, David Datuna removed the banana from the wall and ate $120,000 worth of art.

Datuna claims that this act was, in itself, a piece of performance art, and therefore he cannot be arrested for vandalism.

“Like the gallery said, it’s not a banana, it’s a concept. And I just ate the concept of the artist,” said Datuna to CNN.

If the banana art selling for $120,000 caused uproar online, the “Hungry Artist” performance piece by Datuna caused pandemonium. But, the story still isn’t over.

After “Hungry Artist” (man eats banana) had removed “Comedian” (duct-taped banana) from the wall, there was a void- a void in the gallery, in the art world, and in our hearts. Rod Webber filled that void with a tube of red lipstick and a dream-

Across the wall Webber, 46,  scrawled the message- a conspiracy meme surrounding Jeffrey Epstein’s suspicious death that has become popular with the young folks.  This man, too, claimed the act was “art” and not vandalism, though equipped with fewer lawyers than Datuna, Webber was arrested for criminal mischief. In explanation of his act, Webber was heard saying that stupid could only be fought with stupid (referencing the original art, Datuna’s performance, and his own).

In latest news, Art Basel Miami Beach has closed down the performance space formerly inhabited by “Comedian” as it has become a public safety concern.

What we have here is a multi-layered meta competition of sarcastic, self-indulgent art. Critics and non-art folk alike have been absolutely taken with the whole scene. There are op-eds on the humor of modern galleries, analysis of the angle of the duct tape and whether that makes it art, and frustrated reporting on the sheer stupidity of it all. Those searching for meaning have praised the contrast between the delicate rotting fruit and the permanent, man-made duct tape. Those searching to criticize have complained endlessly about the waste of money and attention on something foolish like this. Here at the Lion’s Roar, we’re taking a different route:

Because anything is art, the Lion’s Roar has been maintaining a “Comedian”-style piece in our staff room as events have unfolded. Note that the staff has added a black picture frame, hanging delicately askew, to enhance the visual interest.
“The Wall Banana”