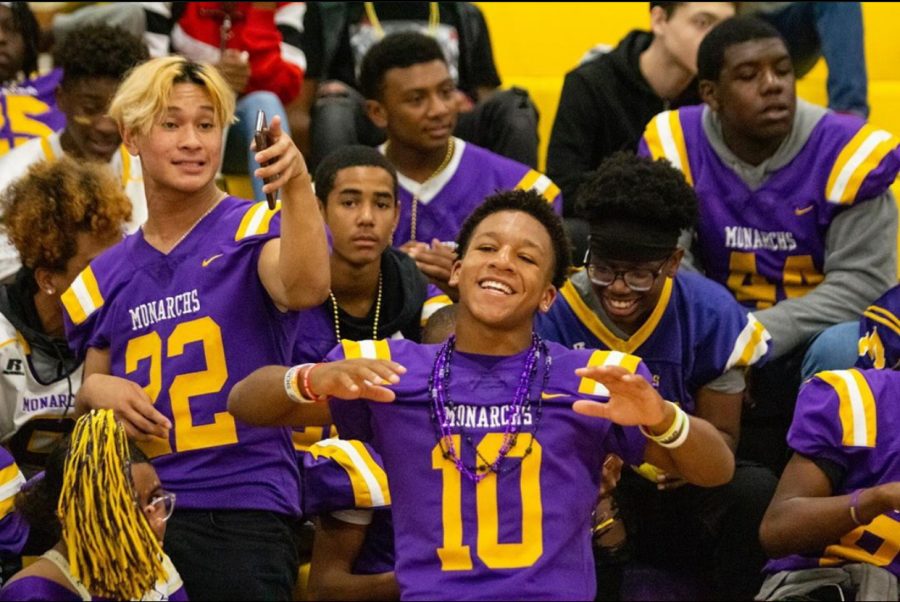 The hype for the homecoming game builds as Menchville football players dance during the pep rally.

The Menchville Monarchs played their annual homecoming game over the weekend on Saturday, October 26 in an attempt to give the Hampton Crabbers, who had a 6-3 record, their fourth defeat of the year. The Monarchs, then with a 3-5 record, were not favorites in this matchup, but with the surprises the Monarchs had pulled off this season, Monarch teachers and students alike hoped anything was possible.

Turnover after turnover led to an even second quarter with no points on either side. A nonexistent Monarch passing game and multiple fumbles put the Monarchs in a hole going into quarter three.

The third quarter was another 0-0 point tie, putting a lot of pressure on the underdog Monarchs to perform in the fourth quarter.

The Monarchs showed some signs of life early in the fourth quarter, with junior running-back Javoni Hales rushing for a 56-yard touchdown to cut the Hampton lead in half. Shortly after, Hampton responded with a 70 yard rushing touchdown. To pour salt on the wound, Hampton scored with only four minutes left, putting victory out of reach.

The Monarchs lost their Homecoming game by a score of 6-24, with 18 of the 24 Hampton points scored by senior quarterback Max Pietrykowski. Menchville is now 3-6, with their final game of the regular season coming up Saturday against Kecoughtan. Menchville now sits at seventh in the division, and they must finish top eight to secure a spot in the playoffs.