Armchair Activism: A Re-Post And A Like Can’t Change The World 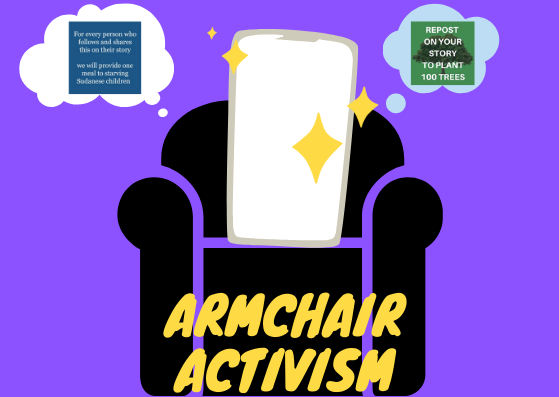 Armchair Activism: Is a re-post really changing the world?

Have you ever gone on social media websites like Instagram, Facebook, or Twitter and seen someone re-post an image that says something along the lines of “Repost/Like this post to help with (fill in the blank with a current social issue)? Maybe you’ve seen posts or petitions to “Give an online signature to change (a current issue)” on websites like Change.org. There are many terms for this, such as clicktivism, slacktivism, or, most popularly, armchair activism.

You may have noticed this in the last few years with hashtags like the #blacklivesmatter movement, which was created to promote awareness about violence and systematic racism towards African Americans. Online activists also promoted the #metoo movement against sexual harassment. These movements and various internet posts have sparked controversy, but more importantly they have helped to positively change social issues.

Social movements like these are what have made armchair activism as big as it is today. Social media has been putting out information since Myspace was created and used in the late 90s and early 2000s, and has now spread into what it is today, with platforms like Instagram and Twitter taking over the internet in the late 2000s and beyond and being used as a way to spread our local and international news. In the last few years, this privilege of quick and easy news has been abused and used to put out misleading information.

Some of these so-called “movements,” however, turn out to be not-so moving. When the crisis in Sudan hit mainstream news, the Instagram account under the name @SudanMealProject, the most popular variation of the username, received nearly 400,000 followers after posting a single post on the account, whose caption read, “For every story re-post this post gets, we will provide one meal to Sudanese children, and you will help spread awareness on what’s happening in Sudan.” Multiple sources have said that this is a scam, and that meals and help in this way could not be easily sent to Sudan or, really, anywhere else in the world.

Senior Reagan Fitzpatrick says that “these movements can be appalling, and they create a false sense that just reposting or liking something can change the entire world.” She continued, “I think that we see something on the internet, and then the biggest problem is that we believe everything- even if it seems too good to be true.”

Fitzpatrick isn’t alone in this belief. Many social media users have slowly started to realize that what they’re doing by interacting with these posts may be hurting the causes more than helping them.

At the end of the day, the best way to help with social issues is to get out and make a difference, rather than thinking that a simple re-post, like, or follow will help. Doing actual research on these issues is key to making a change that is both helpful and meaningful to our world.