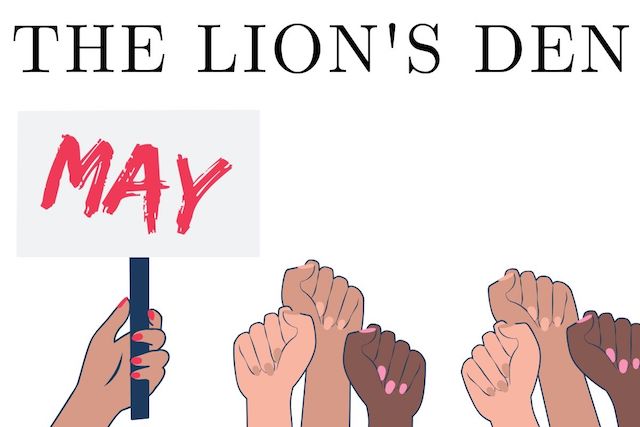 This month, many states, including Alabama, Georgia, and Ohio, have passed legislation to ban abortions. Some politicians aim to overturn the Supreme Court case Roe v Wade, which ruled that an abortion was considered in a women’s right to privacy. These new state laws make it illegal to have an abortion after a certain time, and they persecute women who try to travel out of state to have the procedure. Women who have abortions, and primarily healthcare providers who perform abortions, may be criminally charged. We asked our Lion’s Den staff how they feel about these new abortion bills, and what they think the right course of action is.

Laura Madler, Editor in-Chief- “I’m pro-choice, and I believe that that women- and healthcare providers- should not be prosecuted for carrying out an abortion. “Heartbeat bills” like these put extreme time pressure on a woman’s window to terminate pregnancy- often before serious complications arise, or before she even knows she is pregnant- and the results of this legislation, mainly women seeking abortions outside of the medical system, could be very dangerous. What’s really kind of scary about this whole situation is that we’re realizing how fragile some of these decisions are- decisions that we thought were set in stone. It starts with just a few states, and then at that point decisions can be overturned on a national level. Supreme Court cases that we thought were instrumental in women’s rights can just be overturned like that. Hopefully we can resist.”

Aiden Crousore, Staff Writer- “I think my feelings and beliefs are are very simple. Personally and democratically speaking, I’m pro-choice. However, when I’m thinking about it simply stated, I just feel that abortion, to me, is simple murder. I’m pro-choice, I guess you could say, because I feel as though people can make their own decisions, and if you’re not hurting anyone, then those decisions don’t really matter.”

Beth Ellis, Staff Writer- “Honestly, I understand where the authorities are coming from, but I completely disagree with their decision to ban abortion. Abortion is a very sensitive topic in our society, but I feel like it’s something that should be allowed for women of all ages, without parental permission or knowledge. A woman’s body is her own, so she should be able to make her own choices concerning the issue. The government, or any men in general, should not be making decisions about what is best for women. They should be allowed to make that choice on their own since only they know what is best for themselves and their families.”

Alonra Rivera-Pena, Arts and Entertainment Editor- “I think at the end of the day females are the ones who should be responsible for their own bodies. I don’t think a bunch of men in Congress should be allowed to decide that role for them. I think, even if someone does it or not, their decision should be respected regardless. Who are you to judge someone when you’re not in their position or circumstance?”

Jai Mendez, Sports Editor- “First of all, there’s no one but males who are making these decisions- and they will never go through pregnancy; they will never understand what it is. Why are they making decisions for us? I mean, you can be against abortion, you don’t have to agree with it, but women should still be able to have the choice to do it. It’s a long process, and it’s something very hard to go through. Women should have the choice to do it, you can’t just take that away from them. People say, “If you ban guns, people are still gonna find a way to get them.” Women are still going to find a way to have an abortion, but that’s so dangerous and risky.”

Leonela Carbral, Staff Writer- “It is our (women’s) right to privacy and to have abortions. Things happen and there are times when an abortion is necessary. It is the woman’s decision because it is her body and she knows what is best for herself and her future.

Kelly Ritenour, Clubs and Activities Editor- It is absurd that the government is trying to regulate what a woman can do with her body. The government cannot and should not take away a woman’s right to privacy, or dictate what kind of medical procedures she can and cannot have. Many pro-life arguments against abortion are backed by religious beliefs or lack of knowledge on how and when an abortion procedure takes place. Although an abortion should not be encouraged, it should be available to all women as a last resort, especially if there is a medical complication or sexual assault. A woman has the right to decide what is best for her body and her family. Some women have reasoned that they chose to get an abortion because the alternative was to put their child in the foster care system. If foster care is so horrendous that a woman would rather abort her baby than put her child through that, isn’t that what the government should be focusing on reforming? The foster care system is a government funded program, and they have the authority and the responsibility to maintain it. In order to bring more children into the world, we need to protect the people who are already in it. You cannot call yourself “pro life” and turn a blind eye to the needs of struggling women and children in today’s society.