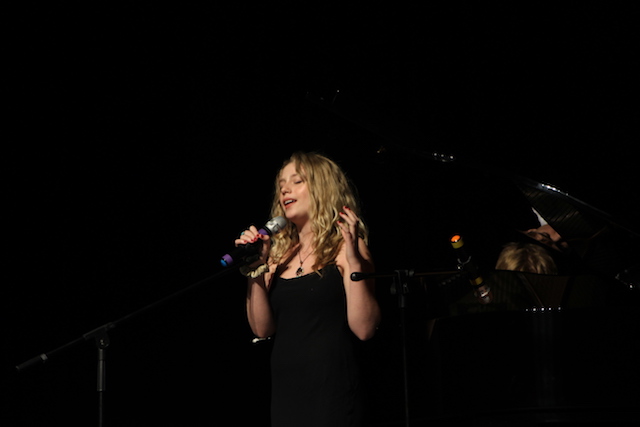 This year’s Menchville’s Got Talent show was packed full of amazingly talented students. The auditorium was filled with eager friends and family anxiously anticipating their loved ones’ performances. When the lights finally went down, everyone turned their attention toward the stage. Jayden Pipkin opened the show with a wonderful performance on the trumpet.

The next act was a band called The Mandela Effect, made up of Arik Rhone-Christensen, Tori Rymes, Tony Sales, Ethan Matthews, and Lucas Pinson. With Matthews and Rymes on vocals, they peformed a fun and well paced cover of “Santeria” by Sublime. Later on in the show Tory Rymes played and performed a piano cover of “Death of A Bachelor” by by Brendon Urie. Next, Alex Swanenburg belted out “Not For the Life of Me” from Thoroughly Modern Millie with her broadway bound voice. Friends Quayvon Hilbert and Jazsmein Singleton performed a soulful rendition of the song “Creep” by Radiohead, a performance that stuck in the minds and hearts of the audience well after the duo left stage.

Calder Holloway performed a skit, which was unique to this year’s Menchville’s Got Talent lineup. Holloway portrayed the notorious Gotham criminal Joker alongside his partner-in-crime Harley Quinn, played by Oliver Smith-Nolker. Guest stars included Sarah Riske as a doctor and Arik Rhone-Christensen as Batman. Holloway’s portrayal of the joker left the audience starstruck. A member of the audience even referred to Holloway as his “second favorite Joker next to Heath Ledger.” Holloway remained in costume, and in character, for the rest of the night.

Autumn Moore sang “Give Me Love”  by Ed Sheeran.  Moore was followed by Andre Smith on the guitar. Evan Gray sang passionately and strummed along on his guitar as well. Trevor Goodwin debuted his singing voice to the first time for many Menchville students.

Michael Garret and Michael Keel performed “Moondance” by Van Morrison with Garret on piano and Keel on vocals and guitar. Lance Fox followed up with a mesmerizing solo performance on the piano.

Afterwards, homeschool student Izzy Lemm sang her soul out with her partner, Matt Swetnam, on the piano. Izzy’s voice wowed the audience.

Brandon Jackson made a glorious return to the stage after his performance in Menchville Rocks. He didn’t hesitate to show off his talents with a hint of bravado. Lastly, Jailyn Commodore closed the show with a graceful solo performance.

As the audience waited for the judges to decide on the five finalists, Pete Marcier and his band of teachers entertained the crowd. The judges re-entered and Mercier announced the finalists. The five finalists were Alex Swanenburg, Quayvon Hilbert and Jazsmein Singleton, Matt Swetnam with Izzy Lemm, Michael Garrett with Michael Keel, and Trevor Goodwin. The audience got to choose the winner by applause. Although cheers were heard loud and clear for all five final acts, none resonated louder than the applause for Matt and Izzy. The duo took first place and were presented with a check for $50. The second place winner was Trevor Goodwin, and third place was Quayvon Holbert and Jazsmein Singleton.